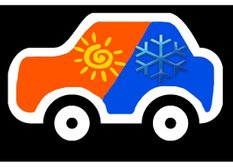 You're stopped in traffic on an August afternoon. Sweat drips from your neck all the way down your back until your shirt absorbs it, making a damp spot between you and the seat. Your legs are either stuck to the vinyl upholstery or prickled by its cheap velvet. Your hands feel like they're about to slip off the steering wheel, and you're thankful your eyebrows are keeping the sweat from running into your eyes. Well, mostly.

It's become nearly universal, with 99% of all new cars as of summer 2010 coming equipped with it.

It's also been with us longer than you might think. Packard invented automotive AC all the way back in 1939, and in 1940 was the first car company to offer factory-installed air conditioning. Of course, this early system didn't have a thermostat, but it was better than not having anything at all. The idea caught on, though, and by 1969, more than half of all new cars were sold with air conditioning built in.

Eventually, it was determined that the refrigerant used for decades in automotive AC, known as R12, CFC12, or its brand name Freon, was damaging the ozone layer (it's a chlorofluorocarbon). It was banned from being manufactured in the United States and an alternative, called R134a or HFC134a, was required for all cars manufactured after 1996. Now, any car older than that needs to be retrofitted with a new system that can use the newer, safer refrigerant.

Air conditioning has worked pretty much the same way for its entire existence: it cools and removes humidity from the air. There are three main parts to the system the compressor, condenser, and evaporator that achieve this, plus a few other parts to keep the system running smoothly. Let's take a look at each.

The Condenser works in the opposite way to the Evaporator.  The refrigerant gives up its heat generated by the Compressor by passing cold air across its fins and tubes by ram air or by an extra fan.  The end result of this change is that the refrigerant is now a high pressure liquid and is forced out to the Receiver Drier through the liquid line. Because the Condenser is usually located at the front of the vehicle it can become damaged by debris or corroded by materials from the road.  It can also fail because of weak spots in its construction and also lack of regular servicing.

The Expansion Device comes in many forms.  It can be a brass internally or externally equalised valve, a block type valve or an orifice tube (the latter being part of an Accumulator type air conditioning system).  Expansion Devices have an inlet and an outlet which separates the high side of the system from the low side.  A small restriction in the valve allows only a small amount of refrigerant to pass through it into the Evaporator; the amount of refrigerant passing through the valve depends on the Evaporator temperature.  The most common reasons for failure are contamination, moisture and lack of regular servicing.

As soon as the liquid pressure drops, the refrigerant begins to boil (R134A refrigerant boils at approximately 26 degrees centigrade).  As it continues to boil the Evaporator absorbs the heat passing over its tubes and fins and as a result the air is cooled.   Remember that heat is being removed from the warm air and cold air is not being created.  The compressor, on its suction side, removes the low pressure vapour from the Evaporator and the cycle starts all over again.  The most common reasons for failure are corrosion, weak spots in construction and lack of regular servicing.

Wet your finger and wave it in the air. What you are feeling is a refrigeration effect. When a liquid turns to a vapour it absorbs heat. In this case it is sucking the heat out of your finger.

The opposite is also true. If that vapour then loses that heat, it will turn back into a liquid.

In a refrigeration system, we force a liquid to become a vapour in the evaporator, thus absorbing heat from the refrigerated space.

We then use a compressor to pump that vapour to the condenser.

In the condenser we force that vapour to reject the heat and thus turn back into a liquid so that we can re-use it.

How do we force a liquid to become a vapour? or a vapour to become a liquid? By manipulating its boiling point.

In the evaporator we force liquid to become a vapor by lowering its pressure until its boiling point/evaporating temperature is lower than the air it is trying to cool.

In the condenser we force the vapor to become a liquid by raising its pressure until its boiling point/condensing temperature is higher than the air it is trying to heat.

We can tell what the boiling point/saturation temp/evaporating temp/condensing temp is at various pressures for common refrigerants by checking a pressure/temperature chart.